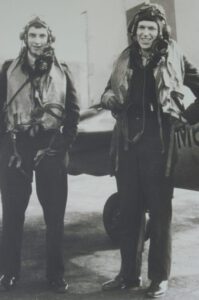 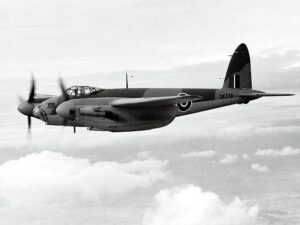 On the night of September 29, 1943, an RAF reconnaissance flight departs from Swannington to northern Germany. The plane is a Mosquito with a two-headed crew. At three o’clock in the morning the plane is shot and crashes near Nieuwlande. Both crew members died in the crash.

Many villagers wake up to the sound of exploding amunition and the light of the fire. Albert Zwaveling, 16, is one of the first to arrive on the scene of the crash. Throughout his life, he will not forget the imageges he sees. When  the crew members are buried by the Germans in a corner of the cemetery in Geesbrug, Albert and his friend make a wooden cross with the inscription “Died for their and our freedom. Two unknown flyingmen.”

It takes two years before the crew is officially identified: pilot Peter Fry and navigator Harry Smith. In an attemt to build a picture of both crewmembers we reseached the lives of both men. The little data and objects that have remained create an image of two young men who gave their lives for our freedom. “Memories Remain” is engraved on the war grave of Harry Smith. We want to keep the memory of brave young man alive and pass it on the the generations to come. 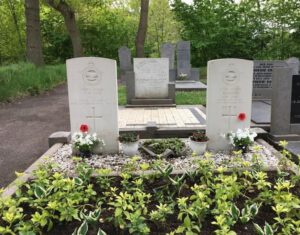 The war graves of Peter Fry and Henry Smith in Geesbrug