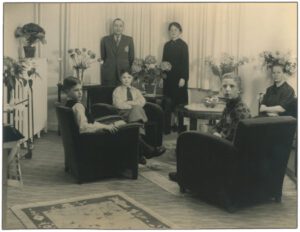 Sally with his family.
The Star of David on the clothes of Sally and his uncle,
indicates that the photo was taken after early May 1942 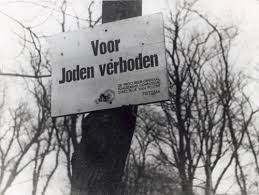 Sally Kimel is twelve years old when World War II begins. He lives with his mother, uncle, aunt and their two sons. Their oldest son, Ab, is almost the same age as Sally. The boys grow up as brothers and friends.

At the beginning of the war the German rules aren’t too severe but over time the regulations become increasingly strict for Jewish people. In the summer of 1942 the raids begin. Sally’s mother is arrested during a raid in the street and taken to Camp Westerbork. The nazi’s summen Sally to unite with his mother. It’s time to go into hiding.

Sally becomes a nonexistent person who no longer has any rights. His uncle arranges a hiding place. One day an unknown man visits the family. He starts a short conversation with Sally and agrees that they will meet at the tram stop the next day. That is how, at the age of fourteen, Sally says goodbye to his family and walks across the street towards an unknown destination.

The unknown man is also at the tram stop. Without looking at Sally he says: We are not together, I don’t know you and you don’t know me, when I get off you get off too.

Sally worriers: Who is this man? Where is he taking me? Can he be trusted? Will Iever see my family again? And where is mother, does she need me, would it be better to report to the Germans?

The exhibition gives the answers. 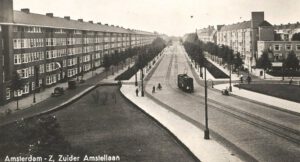 The tram to an unknown destination.
(photo: Amsterdam City Archives)